Panel Built Inc. recently hosted its 12th Annual Company Bowling Party at Galaxy Bowling in Blairsville, GA. Certainly 2011-12 was full of challenges, but Panel Built’s performance was well-deserving of a celebration! Since 2010, sales have increased more than 30%, and PBI has also introduced new product lines: solar canopies and ballistic rated security booths. Panel Built has also been fortunate enough to increase our work force by more than 10 employees in the past year, a statistic owner Mike Kiernan is especially proud of.

While the Bowling Party may be an annual event at Panel Built, it felt as though this year’s party was especially hard earned. Indeed, Panel Built might not be full of athletes, but we sure do know how to have some fun! The food was plentiful and the drinks were cold as the hard-working employees of Panel Built, Inc. were rewarded with an afternoon of fun and relaxation. 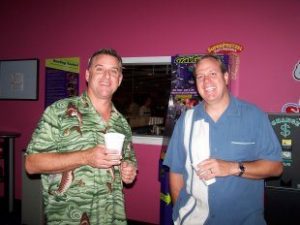 As tradition would have it, the afternoon began with a vote on the best team name. Each year, an award is given to the team with the best name. This year’s trophy went to Production Manager Lee Baenninger for his team’s creative name “Three Men and a Baby.” Lindie Beck also received an award for “Best Bowling Shirt.”

Morale was high for the entire afternoon as employees were reminded of just how great it is to work Panel Built. The employees’ hard work and attention to detail definitely do not go overlooked. Instead, Panel Built, Inc. gives back to its loyal employees each year by offering time to relax and have a good time.

For more pictures of this year’s bowling party, check us out on Facebook
http://www.facebook.com/pages/Panel-Built-Inc-Modular-Building-Systems-Mezzanines/338172575865