The 57thAnnual MHEDA Convention and Exhibitor’s Showcase was a complete success! Held at the Loews Miami Beach Hotel, the convention was three days of great food, entertainment, learning and networking.

General Manager, Dave Arnold, represented Panel Built along with Marketing & Quality Supervisor Conrad Walker at this year’s convention. “We had been a MHEDA member in the past, but never really took advantage of it,” said Dave Arnold. “The decision to come [to the convention] really came after MHEDA had one of our competitors call us…and tell us what a great opportunity it was.”

Boy, were they right! The first full day of the convention was Sunday, when attendees and exhibitors registered and began “poken” for the first time. Exhibitors also set up their booth, and there was a brief new comer’s orientation where the MHEDA Board of Directors introduced everyone to the event and gave a taste of what to expect.

Later that night, the opening party was a big hit. Hundreds of people gathered to mix, mingle, and enjoy the entertainment of a “South Beach Carnival.” 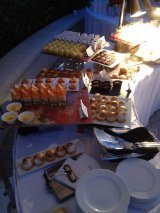 Monday morning saw an incredibly motivating keynote address by former NBA athlete, Walter Bond. Mr. Bond taught us all that we must “connect, don’t communicate.” After his speech, the Exhibitor’s Showcase began. Over 80 of the top material handling manufacturers and suppliers displayed their products and services to nearly 600 MHEDA attendees. The big “hit” of the day was the Poken Tokens. This new device allows users to simply “poke” the devices together to swap business card information, and even pictures, catalogs, and links to their websites – all electronically.

After the showcase, renowned economist Alan Beaulieu took the stage to give his keynote on the upcoming economic climate, what to expect, what to do, and most importantly, when to do it. Even before his address, MHEDA members had been chattering about how good he was; a compliment that was confirmed as soon as we heard him speak.

The last full day of the convention was Tuesday; where exhibitors and attendees alike gathered in different conference rooms to listen to speakers address some of the key issues in today’s material handling business. Among the topics where “The Power of Email Marketing, Winning New Business, “Convergence of Search and Social Networking” as well as “Succession Planning” and “Financial Trends.” Among our favorite presenters were the Bluff Brothers, Brian and Eddie. Not only did their presentation touch on many key concepts in the internet marketing world, but the brothers made themselves available to all in the class for tips, questions, and general follow up after the show. 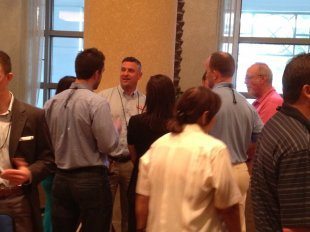 The closing party was held that night, and the band “Private Stock” entertained as the convention attendees enjoyed a wonderful dinner and danced the night away. In reflection, the 57th Annual MHEDA Convention and Exhibitor’s Showcase was a first class experience that promoted and benefitted the material handling industry by providing education, entertainment, and networking to all in attendance.

Congratulations and thank you to the MHEDA President, Richard Donnelly, the MHEDA Board of Directors, and MHEDA Executive Vice President, Liz Richards and her team for the wonderful job they did to make this year’s show a great experience for all involved.