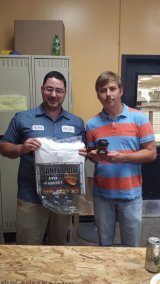 On Friday the 18th of October, Panel Built hosted the 5th annual Chili Cook off. Chili variety ranged from family recipes to the Wendy’s chili sneak in. The long running champ, Kirsten Reff, was beat out this year by Pete Rotko and Batman with their very time consuming chili recipe (Batman not Pictured). Anna Thompson and DJ Rogers placed right behind with their actual homemade chili.
The adjoining costume contest was won by a current employee dressed as a past employee. With Janet as a bride following with a close second. Dave Arnold’s pink outfit won zero points since no one realized he was in costume.