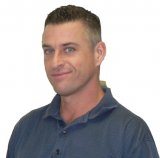 Dave ArnoldToday, Panel Built is proud to announce the promotion of former Operations Manager, Dave Arnold, to General Manager. Dave attended high school in New Jersey and then went to college at the University of Georgia. There he fell in love with the North Georgia region. After spending five years in Ohio and New Jersey as production supervisor for Johnson Controls Automotive Seating Group, Dave “jumped” at the opportunity to join Panel Built in May of 1995 as the production manager.

Dave is married to Sharon Arnold and has two daughters, Aladriel (10) and Alyssa (13). When not at the office, his interests include fishing, boating, sports, and spending time with family.

Dave says his favorite aspect of working at Panel Built is his relationship with owner Mike Kiernan. “He has always been supportive and allowed me the freedom to manage in my own style,” remarks Dave. “Even in the humble beginnings, Mike ran the company with vision and always treated the business as the industry leader he knew it would one day be.”

Over the past 16 years, that vision has come to fruition; and as the company continues to grow, Mike has appointed Dave as the one to lead Panel Built into the future. Mike explains, “Dave was the first person we hired when we first started Panel Built, and has been a committed force for our company’s success. His beliefs in the pursuit of excellence, great customer service, integrity, solid execution, growth for all and a passion for being the best, make him a proven leader for PBI.”

Looking ahead, Dave says his primary goal will be continued growth as a company: creating new jobs, increasing company pride, and expanding into new markets – both geographically and with new products. If there was one motto Dave would like Panel Built to operate by, it is to be “bigger, stronger, faster” than the competition. He also notes there are some exciting new changes on Panel Built’s horizon; “changes that will greatly benefit our customers.”