Another week of Union County Men’s Softball is in the books, as are two more losses for Panel Built. PBI fell victim to the Yardbirds by a score of 13-7. Although the score wouldn’t indicate a close game, Panel Built had victory within reach up until the sixth inning. Kevin Thomsen pitched for PBI as he and the defense held the Yardbirds to three runs through three innings. PBI scored four runs over the opening three frames and led 4-3 going into the fourth inning. The opportunity was there for PBI to jump out to a much healthier lead, they just didn’t take advantage. 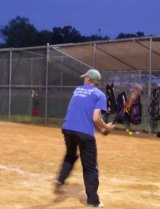 The problem in this game wasn’t errors or utter hitting dominance by the opponent. The problem in this game was the lack of offensive execution by the men from America’s top prefabricated building maker. Panel Built has the pieces to consistently put up 15-20 runs a game, however, the pieces have rarely made a puzzle. Injuries and line-up shifting have accounted for this inconsistency. Shane Wright, hampered by quadriceps injury, has done his best to play through the pain, but is clearly not 100%. One of the team’s better pure hitters, GM Dave Arnold, has been out with a pulled hamstring. Slugger Nathan Eller has been out since the second week of the season with a torn achilles, and Conrad Walker hyper extended the pinkie finger on his fielding hand. These injuries along with absentee team members have caused chaos in the line-up. When teams don’t play together every game, they don’t gel together. PBI is hoping to return Wright and Arnold to the lineup next week for the final two games of the season.

Last night also marked the season debut of recently acquired OF Wes Fulghum. Fulghum had a successful opening night, going 2-2 with an RBI. Panel Built also acquired IF Ronnie Gore this past week that played both SS and 3B last night, at the same time.

Be sure to come out next Tuesday and Thursday to support the Panel Built squad!