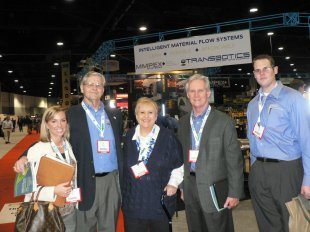 Manufacturers and distributors from all over the country, many of them competitors, rubbed elbows at the Georgia World Conference Center in Atlanta for MODEX 2012, the largest show of its kind in the Southeast.

Sponsored by the Material Handling Industry of America, MODEX started on Monday February 6th and wound down Thursday the 9th. This was the first year for the show, and the overall consensus seems to be that it was a resounding success. Exhibitor space was completely sold out, and MHIA CEO George Prest says they are already working on Modex 2014, which will be held in an even larger hall to accommodate more exhibitors.

Southeastern modular manufacturer Panel Built, Inc. attended the show, and sent 16 people from various departments. Representatives from Sales, Marketing, Engineering, Materials, Quality, Safety, Shipping, Human Resources, and Production attended over the 4 days. They came back with new insight into the industry, and were excited about some of the solutions they saw.

Panel Built Sales and Marketing representatives went down on Monday and Tuesday, and truly enjoyed the show. “It was a great opportunity to meet some of my distributors face to face, and to get to know them a little better,” said PBI Sales Representative Jane Griffin. “I saw immediate application for some of the products to work with our systems.”

Panel Built HR Manager Gay Burke also enjoyed attending. “It was great to get out from behind the desk and get a better grasp of our overall industry and what most of our dealers actually sell,” commented Burke. “Seeing things in person as opposed to on paper makes it all come together.”

Modex offered over 70 educational seminars, and Panel Built Quality Improvement Supervisor Conrad Walker attended several of them. “The sessions provided valuable insight into emerging markets, trends, and best practices across the material handling industry,” Walker noted, “and the show itself was a great opportunity to learn more about our customers and dealers, as well as the industries they serve.”

Panel Built also had the opportunity to meet some of their competitors, who were very gracious. With all of the positive industry indicators in the news recently, it appears there will be enough business for everyone.

Congratulations to MHIA on a successful event. We look forward to the 2014 show.