June 15th marked the unveiling of Panel Built’s most recent addition to their product line, with an event that did not disappoint. 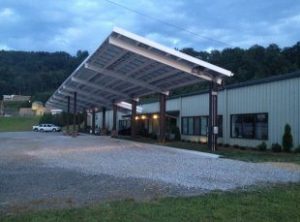 Guests began arriving nearly an hour early to be a part of the event. Songs about sunshine played in the background as employees and guests mixed and mingled before the presentation began. The cars kept rolling in, and at about a quarter past eleven Mike Kiernan took the stage to begin the event.

Mr. Kiernan, President of Panel Built, Inc. began with a few words on how the solar project came about, what it meant for Panel Built, and the impact solar can have on the country. He then passed the mic to General Manager Dave Arnold who briefly explained what Panel Built actually does, and gave a quick history on how they got there. A joke or two later, the attention was passed back to Mr. Kiernan.
Mike gave thanks to all those involved in the solar project; including Creative Solar USA, Inc., United Community Bank, and Blue Ridge Mountain EMC amongst others. He then presented three solar power education kits to the local schools in the names of those key to this project.

A prayer later, Mike was ready to christen Panel Built’s new solar array in grand fashion. He cocked the bottle back, swung it at the steel column, and “doooing,” the bottle bounced off! After a good chuckle from the crowd, Mike gave it a second shot and was successful! 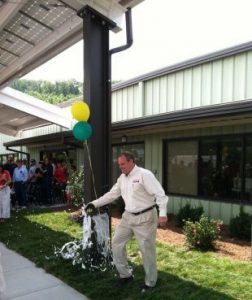 The crowd then turned their attention to the gourmet treat Panel Built’s own Install Manager Shane Wright had prepared. The pulled pork tacos with jalapeño slaw and homemade pico de gallo were a major hit with guests young and old.

Panel Built gave tours of their two production lines as well as the new solar arrays. Guests commented on the clean facilities and knowledge of the production managers, as well as the organization and coordination of the overall event.

Panel Built considers the event a great success, and truly enjoyed the opportunity to show our friends, family, and community what hard work and American know-how can accomplish.