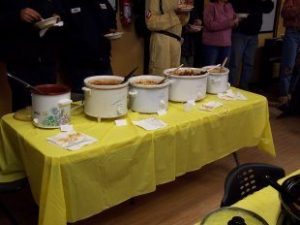 October 31st, 2012 marked the day of Panel Built, Inc.’s 4rth annual Chili Cook-off. There were 14 entries spanning a wide range of chili varieties. The shipping department, led by Tommy Pries, was hoping to reclaim the title belt and end their 2 year drought. As always, their efforts will be spearheaded by Tommy’s always delicious (and greasy) homemade recipe. Kirsten Reff, perennial powerhouse and current back-to-back champion, brought in her own concoction, and was seen buttering up the taste-testers by giving out samples earlier in the week.

Gay Burke of Human Resources and Saleswoman Ramona Walker brought in their own white chili dishes, while Materials Manager Tom Orchanion brought in his own Louisiana style Saints Beans and Rice. Judging on the Saints current record, Orchanion might have destined his chili for failure. Shane Wright’s famous “squirrel chili” made an appearance as well. Wright’s bold confidence was apparent, as he did not hesitate to divulge even the deepest secrets of his chili recipe.

“I just get a few cans of Hormel and throw some squirrel meat in there,” said Wright.

A few upstarts were seen this year as well, and are showing some promising talent. Marketing manager Conrad Walker threw his hat into the ring this year. Marketing’s Richard Sarrell and Engineering’s Michael Driskell, both hired in September, teamed up to form another first time contender.

After all was said and done, the Chili Queen retained her crown. Kirsten Reff took home her third consecutive championship, narrowly edging out Shane Wright for the title. However, fun was had by all and bowls upon bowls of chili were eaten. 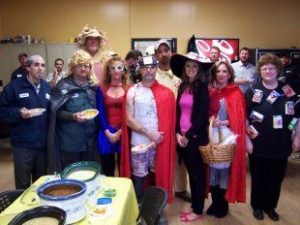 The adjoining costume contest was won by the Super Heroes, consisting of Janet Long (Spiderwoman), Tommy Pries (Mullet Man), Dennis O’Brien (Super Shipper), and Robert Flowers (Ghostbuster). However, some other great costumes appeared as well. Salesman Kevin Thomsen appeared as a very convincing Scarecrow. Gay Burke moonlighted as Little Red Riding Hood and Lindie Beck went out of her realm and decided to come as a nice witch.

And now it’s time for an antacid and a nap.