Last Friday marked one of the greatest sports events to ever take place in Georgia. The Kilted Golf Classic at Butternut Creek Golf Course was a part of the Blairsville Scottish Festival and Highland Games, and Panel Built sent their best to represent. 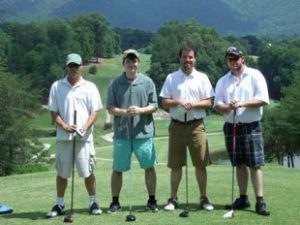 Eighteen holes and 6,500+ yards came between the Panel Built golfers and the coveted Kilted Golf Classic Cup. Tee time was 11:00am and by then, the Panel Built crew was in full swing. The tournament included 13 competitors, all in groups of four, playing a “best ball” style round. For those unfamiliar, “best ball” means all four players tee off, and the next stroke (for every player in the group) is played from the best lie of the four balls. This continues until the final put of each hole.

Beau Ballard, A.J. Shook, Ken Carpenter, and D.J. Rogers represented Panel Built with concentration, effort and enthusiasm reminiscent of a Tiger Woods, Rory McIlroy, or even Bubba Watson. The group played fair and had no bogies on the round. A spectacular tee shot on the 7th was the highlight of the day. Beau Ballard, in an act of heroics, decided to forgo the easy lay-up shot and went straight over the pond and stuck his ball right on the green.

“It was a really sweet shot,” explained Ken. In fact, there were a number of sweet shots, totaling in 7 birdies for the team. 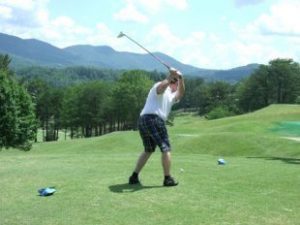 At the end of the day, the Panel Built group managed a score of 65 and finished 7th, right in the middle of the 14 groups competing. “It was a blast, even if I couldn’t hit the broad side of a barn,” said Rogers.

Thanks to all those who made The Kilted Golf Classic a success! Hopefully the Panel Built crew will work on their swings and move us up in the standings next year!