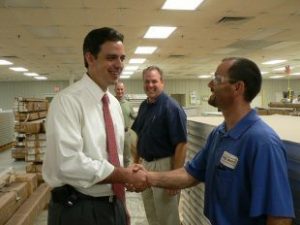 Congressman Tom Graves visited Blairsville manufacturer Panel Built during his recent trip to Union County, GA. He chose Panel Built at the invitation of David Apple, Regional Manager for the Enterprise Innovation Institute at GA tech.
Apple and his team at Georgia Tech had worked with Panel Built on implementing LEAN manufacturing techniques. He was impressed with their quickness in responding to customer’s needs, and their commitment to constant improvement of their manufacturing processes.
“I wanted the Congressman to see Panel Built, because they are in a rural area, and they have a good track record,” explained Apple. “Panel Built is a good stable company based in this community; they could relocate anywhere but choose to stay in Blairsville.”
Congressman Graves wanted to learn more about a local manufacturer who was thriving in spite of the difficult economic times. He spent several hours at Panel Built and got a good overview of the operations of a successful Georgia Small Business.
“We are fortunate that the Congressman is extremely interested in the manufacturing sector,” said Apple. “He knows how important it is to our economy, and he wants to figure out how government can get out of the way (of business) and be less intrusive.”
Graves had recently visited some larger manufacturers like Shaw and Mohawk in Dalton, and wanted to know how a smaller company like Panel Built had managed to grow its business and create new jobs during the recession. He toured both the Panel Assembly Line and the Steel Fabrication Line, and spoke with many of the employees. 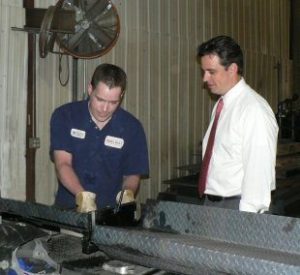 The Congressman was interested in LEAN manufacturing concepts, and got a great example of innovation from Wesley Sommer on Panel Built’s Steel Fabrication Line. Wesley had improved a process by designing a metal working jig that improved the quality, efficiency and safety of stair tread production. He explained the innovation to Graves, who appeared suitably impressed.
Graves spent some time with company president Mike Kiernan, discussing how Congress can help small businesses thrive and grow. “My time with the Congressman was very positive,” said Kiernan. “He really seems to want to hear from his constituents. We were able to show him our operation and what makes us special. He spent a lot of time with us, met most of our employees, and was genuinely interested in the work we are doing.”
Congressman Graves had this to say about his visit: “Panel Built’s success is clearly a result of their innovative and commonsense solutions. I was also impressed with the ‘can-do’ spirit of the whole team. They never respond to any question or idea with ‘no’—the word isn’t in their vocabulary—and I think that mentality perfectly captures the essence of doing business in America.”
Apple also appreciates Panel Built’s innovation. “The way they have streamlined their business is impressive. There’s a lot more to manufacturing than what happens on the production floor. The various departments, like Sales, Engineering and Shipping… they tie it all together very well.”
He wants the Congressman to understand how hard it is to create new jobs with “all of the talk coming from Washington.” “Everything has to be working really well for a company to be hiring,” said Apple. “You have to have hope for the economy and the future, then you can stick your neck out and say ‘let’s hire some more people’.”