Why do we celebrate the 4th of July?

Margie Schramke
We all learned about it in school, but today, many Americans are a little fuzzy on the reason we celebrate. So here is a brief refresher, the “Cliffs Notes” version if you will, on why we should be grateful as we fire up the grill and watch fireworks this 4th. 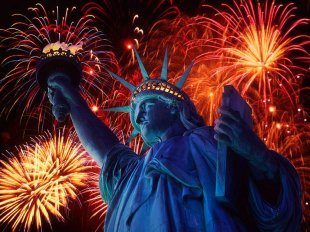 The 4th of July is also known as “Independence Day” for a reason. It was on this day – July 4, 1776 – that the 13 original colonies adopted the Declaration of Independence. This “declaration” formally proclaimed that the former British colonies were now independent states, no longer governed by the British.
Thomas Jefferson is credited with writing this “declaration of independence,” and it was considered an act of treason by the British government. The American Revolution was the result of this revolutionary document, and many good men fought and died to preserve the ideals it set forth.
Today we celebrate the 4th of July as a reminder of the passion and bravery of our founding fathers, and to honor their vision of a country that believes “that all men are created equal, that they are endowed by their Creator with certain unalienable rights, that among these are life, liberty and the pursuit of happiness.”
So as you enjoy this holiday, take a moment to reflect on this amazing country we live in and the vision and sacrifice that made it possible.

There are hundreds of thousands of American military deployed all over the world who are still fighting to protect the ideals of this great country.

Panel Built would like to salute our military and their families, and thank them for the many sacrifices they make to keep America “the land of the free.”