The Basics of Pharmaceutical Cleanroom Design 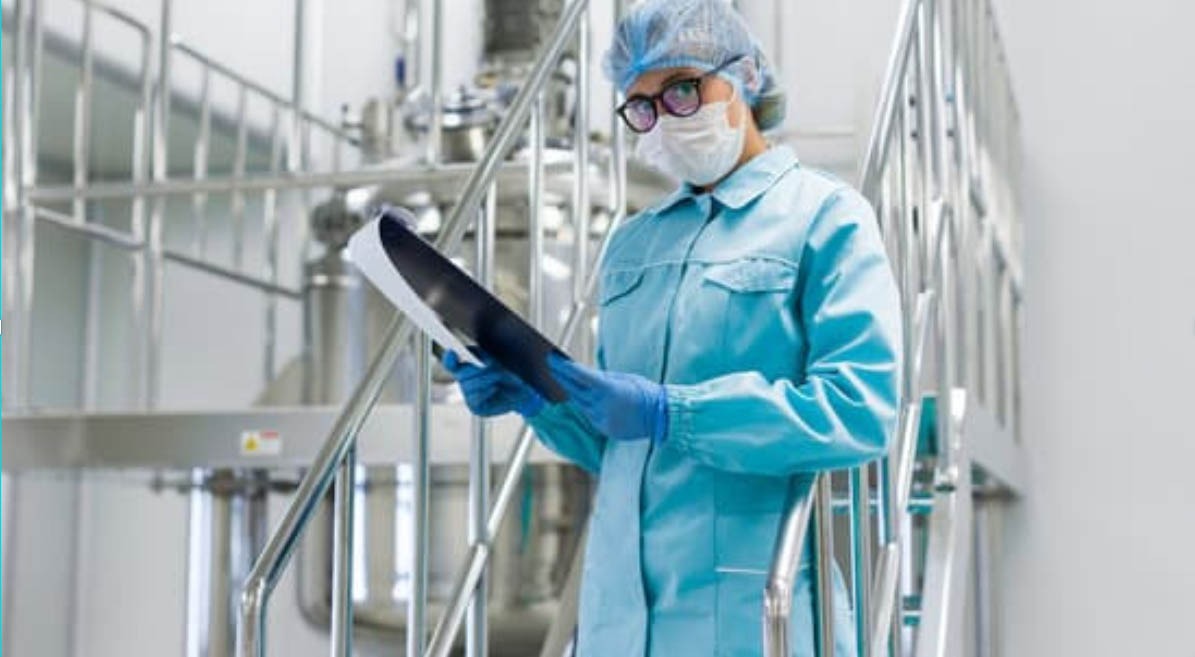 In order to protect consumers, United States pharmaceuticals are one of the most heavily regulated industries in the country. The FDA creates a number of standards and tests for Pharma companies to comply with in order to create new drugs and manufacture current ones to reduce side effects and ultimately mitigate the risks to their customers. And creating a highly controlled, uncontaminated manufacturing and packaging environments is a high priority. Pharmaceutical cleanrooms are specially designed to produce this environment.

However, designing, setting up, and installing the appropriate cleanroom environment for your application can be a daunting undertaking in and of itself. Designing a cleanroom involves a variety of rules, jargon, and products that can be overwhelming, especially for those new to the space.

But we have developed this handy guide that should hopefully provide a solid jumping-off point and help with the basics of modular cleanroom design.

Cleanrooms are categorized based upon the number of particles or contaminants in a given cubic space air. The International Organization for Standardization (or ISO) has developed a series of Cleanroom classifications in which most Pharmaceutical cleanroom environments in the US are designed to meet. As we have talked about previously in What Are Cleanroom Classifications?,

There are a variety of factors that go into creating a well-controlled cleanroom environment, but these factors will generally boil down to one of three main categories: 1. The Operations, 2. The Surfaces, & 3. The Air Quality.

Operations Within a Cleanroom 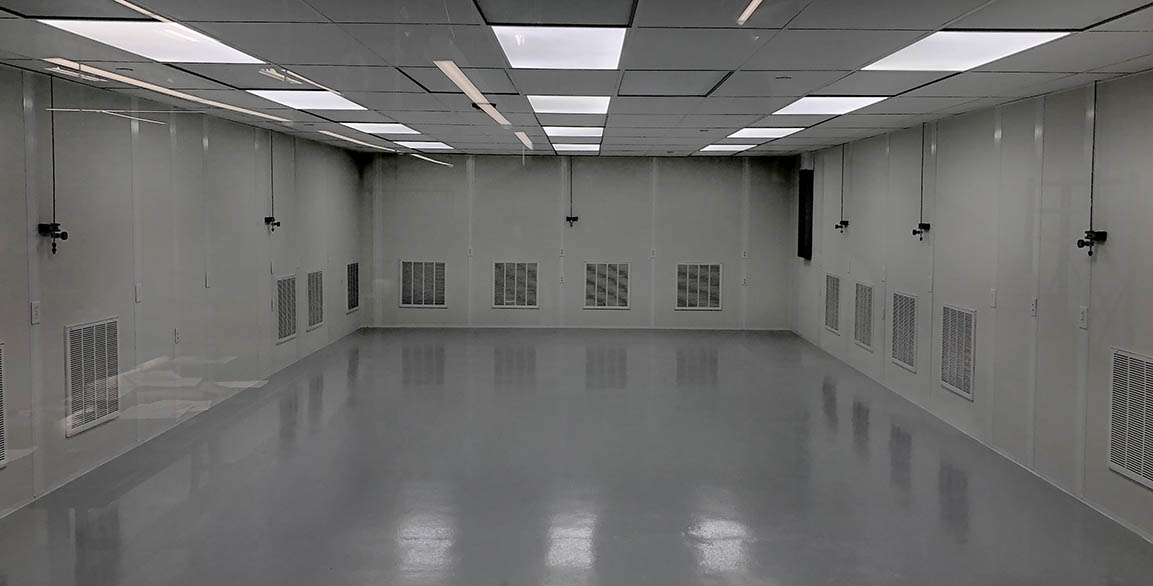 Within every cleanroom (or regular room) the number one source of contamination is always the same... the people inside it.  That's why the operations, layout, and protocols within a cleanroom design will typically be the first step in the design process. Cleanrooms must be laid out in the order in which people enter it from the outside, "contaminated" air. Generally, as a person moves from room to room, the cleanroom can only increase one ISO level at a time.

As an extreme example, a person cannot simply walk into a high-level, Class 100 cleanroom from the regular, outside air. All of the dirt and debris on their skin and clothing would be carried into the room.

Simply opening the door would introduce countless contaminants, entirely ruining the cleanroom environment. For this reason, employees entering a cleanroom from the outside will typically first enter a Class 100,000, then a Class 10,000, then 1,000 and so on. However, there are also a couple of room types within a cleanroom that are used to accomplish this.

Airlocks, Transition Rooms, & Ante-Rooms all generally serve the same purpose within a cleanroom assembly, which is to create a buffer zone among the different levels of cleanliness. Airlocks and Anterooms will generally be found at the entrance of these systems, and transition rooms will be used internally. One of the main tools used in Airlocks and transitions is the use of pressurization within the room.

Placing these transition rooms under positive air pressure is one of the primary techniques used to keep contaminants out. This means at any opening in the room's envelope, air will be pushing out, rather than coming in, keeping out foreign particles. The higher the classification of cleanroom, the more positive pressure that will be used within the room. (Note: In some cases, a negative pressure room may be implemented in order to keep a contaminant inside a particular room. This will be used when toxic chemicals are in use or even in hospitals wards treating communicable viruses.)

As we stated earlier, the people within the cleanroom create the largest risk factor in terms of contamination. Gowning rooms are designed to combat this problem, and even can act as a transition zone as well. Cleanroom gowns allow people to enclose the contaminants on their person within the gown, before entering a high-level cleanroom environment. With the gowns kept in a clean environment, this will greatly reduce the risk of carrying new contaminants into the next room, especially when used in combination with an air shower. Cleanroom gowns may or may not be required depending on the classification of the cleanroom environment. Generally, when the rated for ISO 6 (Class 1,000) or greater, a gown will be required, including gloves, masks, and shoe covers.

Surfaces Within a Cleanroom 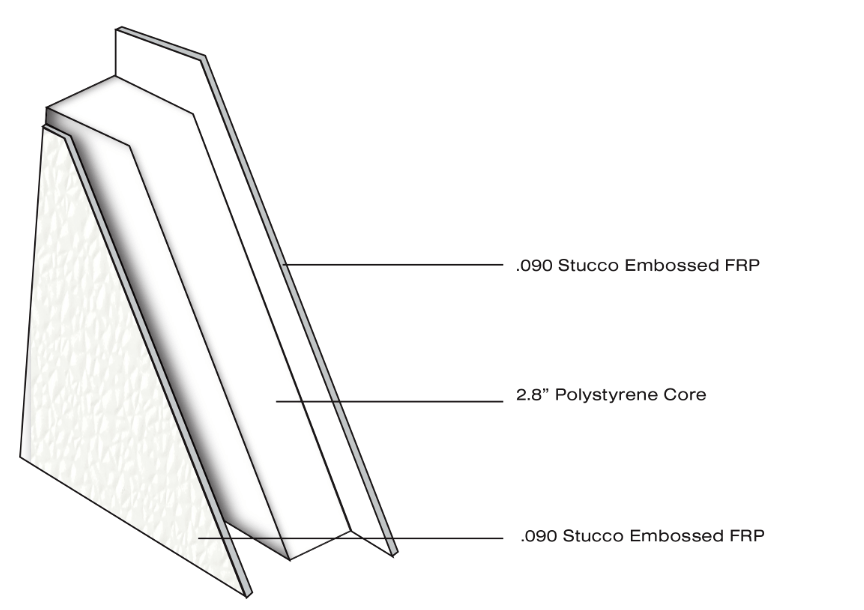 Next, there are a few characteristics that the surfaces within a cleanroom must have. These characteristics follow the same rule of reducing the number of contaminants as much as possible, and the higher the cleanroom classification, the more strict they become. First, the cleanroom walls should offer a non-shedding facing. This means that the walls inside the cleanroom should not be able to introduce any contaminants themselves. Anything that could potentially crumble, peel, collect dust, flake, etc. should not be used. Next, the surface should also be non-porous so that it does not allow for the congregation of micro-organisms. Finally, the surface should be easy to clean. This requirement can go beyond the materials used in the wall panel. The system itself should be designed to eliminate recesses, ledges, nooks, crannies, and any other hard to reach spaces. These are spots in which particles can collect and can be difficult to clean. Because of this, high-level cleanrooms may require fully-flush doors, windows, lighting, pass-throughs, etc.

Despite the different characteristics these surfaces must have, there a variety of different wall systems and materials that will work. For Panel Built, we use a few different wall panel types to create a modular hardwall cleanroom environment. FRP, or Fiber-Reinforced Plastic, is the most popular interior wall facing for Panel Built cleanrooms. Panel Built utilizes a FRP sandwich panel that is non-porous and offers a high resistance to chemicals, making it easy to clean and maintain. The FRP panels come in both stucco-embossed and smooth facings. For low-level cleanrooms, Panel Built's standard vinyl-covered gypsum wall panels can be used; however, Panel Built's sales specialists will be able to recommend the appropriate facing for your project.

Cleanrooms come in both softwall and hardwall versions. Softwall cleanrooms are typically a more temporary option that are suspended from an existing structure. They will typically be used in smaller applications with less stringent cleanroom levels or may even be incorporated into a hardwall envelope.

Air Quality Within a Cleanroom 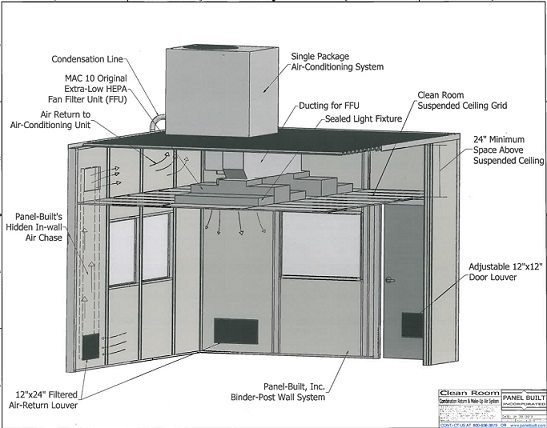 A cleanroom's air quality will be dependent on how well the air is filtered through the system. Typically, cleanroom envelopes will have a fan-filter unit incorporated into the ceiling design. Fan-filter units (FFUs) are the main form of air filtration within a cleanroom. Cleanroom FFUs will generally contain a pre-filter and either HEPA (high-efficiency particulate air) or ULPA (ultra-low particulate air) filters. In addition to FFU's, cleanroom walls will also incorporate an air-return chase, creating a closed system of filtered air. The air in the cleanroom is constantly being cycled through this system to filter out any contaminants or particles that are introduced.

Depending on the Class of cleanroom required, the FFUs will have an average airflow velocity from 1ft/min to 100 ft/min and 5 to 600 air changes per hour. In order to reach higher airflow velocities and air changes per hour, cleanrooms can increase the percentage of the ceiling covered with FFUs with some applications requiring 100% ceiling coverage.

These are some of the basic concepts to understand when looking at your own pharmaceutical cleanroom design. There's still plenty more products and design aspects that can go into creating the perfect cleanroom for you and your facility.  If you have any questions about our modular cleanroom systems, if you're wondering which ISO level would best fit your application, or if you're interested in getting a quote for your own pharmaceutical cleanroom, give us a call at 800.636.3873, send us an email to info@Panelbuilt.com, or just let us know in our LiveChat feature in the bottom-right of the page! We're more than happy to help with any questions or concerns that you may have.