What is a Cleanroom?

Some manufacturing and laboratory environments require highly controlled conditions to function safely or produce accurate outputs.  For example, in the United States, the FDA regulates most of our nation's food, medical devices, and biological products.  In many cases, the FDA requires that these products are manufactured in a regulated environment known as a cleanroom.

What is a Cleanroom?

A cleanroom is a controlled internal environment where airborne pollutants are filtered out to reduce the number of particles in the air.
Other environmental variables like temperature, ventilation, humidity, and airflow adjust to create the ideal manufacturing environment. 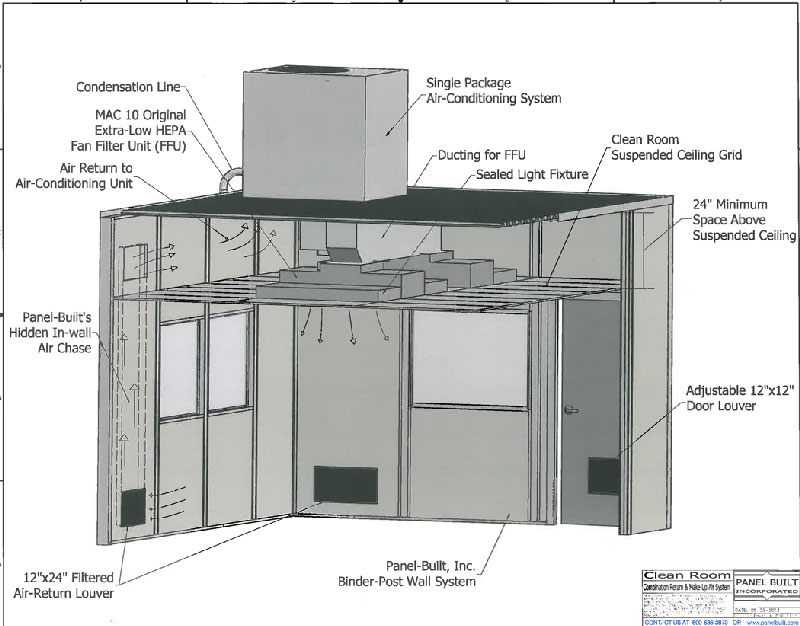 How Does a Cleanroom Work?

The function of the cleanroom is to create a space without the regular particles inside your facility. Therefore, Panel Built generally builds modular cleanrooms as smaller workspaces inside a larger manufacturing facility.  Panel Built's panelized, cleanroom envelope serves as the primary barrier between the clean, interior environment and the rest of the facility.
Inside the cleanroom, High-Efficiency Particulate Air (or HEPA) filters purify the air.  HEPA filters will trap "at least 99.97% of dust, pollen, mold, bacteria, and any airborne particles with a size of 0.3 microns (µm). " Both the external air supply and internal air cycled through the HEPA filter to ensure all air coming into the environment is filtered.

Cleanroom Anteroom Creating A Bufferzone Between Environments
Panel Built cleanrooms often generate positive pressure.  The air pressure inside the cleanroom will be greater than the air pressure of the rest of the facility.  When the entrance to the cleanroom chamber opens, the air is forced out the door to the outside (unless the door leads to another higher level cleanroom environment).  Filtered air pushes into the cleanroom from ceiling vents, and the air returns to the system through a return chase in the wall. The chase is either built into the wall panel or created with a double-wall system.  Any contaminated air will be pushed outside or filtered through the HEPA system.

How "Clean" is a Cleanroom?

Cleanroom can vary significantly in their "cleanliness" depending on their purpose. A critical aspect of manufacturing cleanrooms is their distinct classifications. The International Organization for Standardization (ISO) created nine classification levels of cleanrooms, categorized based on the number of particles or contaminants in a given space of air.   At the end of the scale is ISO 9. ISO 9 is regular room air and is not really a cleanroom.  ISO 1 refers to spaces so clean that very few of them actually exist throughout the world. Most cleanrooms are found somewhere between these two classifications. 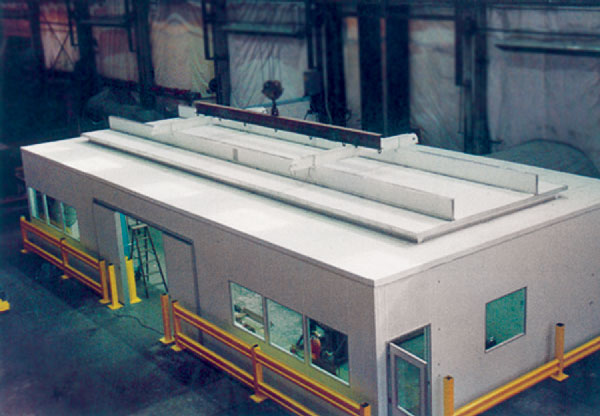 Modular Cleanroom Finishing Installation
For some projects, cleanrooms use federally standardized (FED-STD-209E) equivalents of the ISO levels. ISO 8 (Class 100,000) is the base-level cleanroom, easily achievable for most facilities.  The Class 100,000 denotation refers to to the number of particles (≥0.5 µm) per cubic foot of air. In this case, the interior cleanroom can hold a maximum of 100,000 particles in any given cubic foot of the room.
The ISO cleanroom classifications use a logarithmic scale, meaning going from one class to the next increases/decreases the number of particles by a factor of 10 (100,000 to 10,000).  So, as you move from one ISO level to the next, the cleanliness of the air increases drastically.
As cleanroom requirements become more stringent, the cleanrooms themselves must change in design.  Increased air circulation, more HEPA filters, ante-chambers, air curtains... various aspects can impact a cleanroom's air-particle density.  Perhaps surprisingly, the number one most common contaminant cause is people. When coming from a non-cleanroom environment, you carry contaminants like dust, dirt, or cookie crumbs. These rooms act as a sort of 'buffer zone' and can help disinfect you and trap contaminants before entering a high-level cleanroom environment.
However, when creating a high-level cleanroom environment, top-of-the-line filters, high air cycles, and positive pressure can only take you so far. One crucial aspect of high-level cleanrooms is ensuring occupants use proper garments and procedures. For instance, a relaxed cleanroom environment may only require specialty shoes. In contrast, high-level cleanrooms involve an intensive gowning process with a full-body cover, gloves, boots, and probably an incorporated respirator.

Benefits of A Modular Cleanroom System

Adding a cleanroom to your facility may seem complicated, trying to decipher the various cleanroom terminologies, components, and classifications. However, Panel Built can handle every step and help you through the entirety of the cleanroom process. Working with the leading companies in the cleanroom industry, Panel Built offers turn-key cleanroom projects all across the United States.
Panel Built utilizes a pre-manufactured wall system design. So, the cleanroom envelope has already been fabricated and, in most cases, pre-wired before it is delivered to your facility. Using prefabricated wall panels, Panel Built can install your new cleanroom faster than a stick-built alternative. Additionally, modular construction results in less waste overall and requires minimal clean-up. These benefits result in one of the most convenient and hassle-free cleanroom solutions available.
Panel Built's panel and binder-post wall systems allow for fully custom cleanroom layouts designed to fit any facility. Wall panels can be composed of custom skins, substrates, and cores to give custom properties to your cleanroom. Generally, they use a non-porous, easily cleanable wall facing like our Fiberglass Reinforced Plastic (FRP) panels. 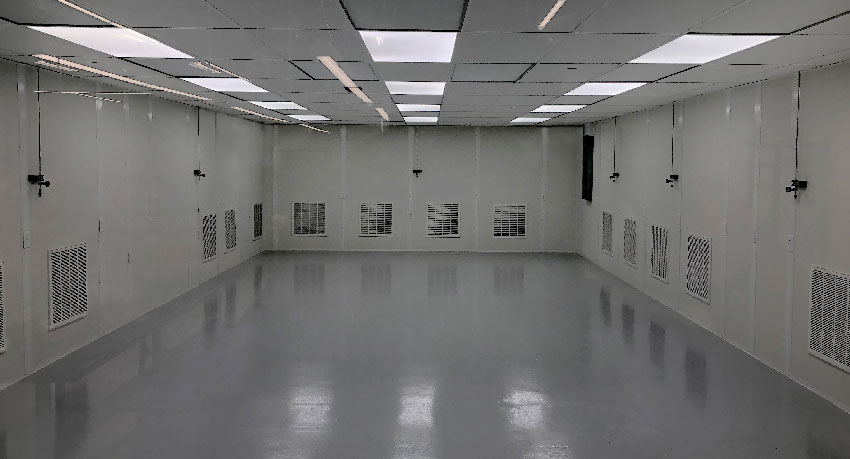 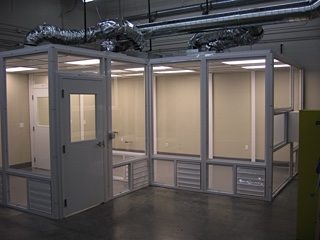 Custom, Glass Wall Cleanroom
Additionally, Panel Built offers total shipping and installation for our cleanroom systems to provide a turn-key solution. Across the United States and internationally, Panel Built works with an esteemed list of installers to ensure your project is in the hands of a trained professional at all times.
If you have any questions about our modular cleanrooms, just let us know.  Panel Built is a customer service driven team, aimed to make your cleanroom project as convenient and simple as possible.  Give us a call at 800.636.3873, send us an email to info@panelbuilt.com, or let us know in our LiveChat in the bottom right of the page!